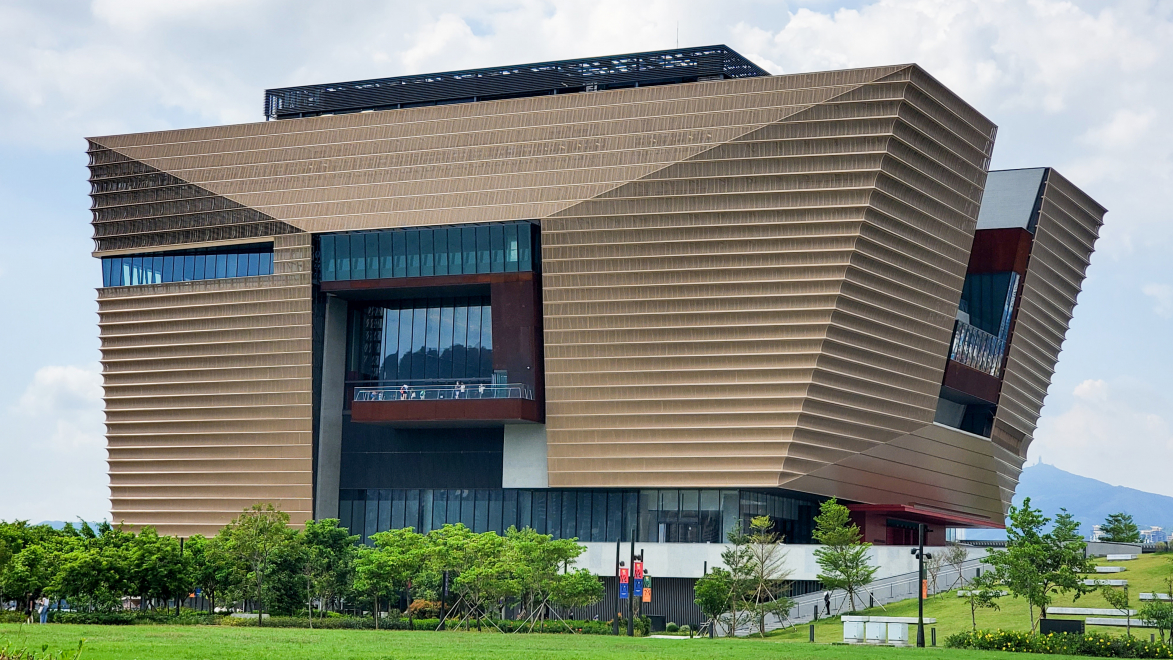 Construction of the Hong Kong Palace Museum (HKPM) commenced in March 2019 and the works were completed in December 2021. The museum has been opened to the public since July 2022.

HKPM is located at the western tip of the West Kowloon Cultural District along the Victoria Harbour waterfront. Designed by acclaimed Hong Kong-based Rocco Design Architects Associates, the seven-storey building covers a site area of 13,000 square metres with a total floor area of approximately 30,000 square metres, featuring an exhibition space of 7,800 square metres across nine galleries. HKPM embodies the aesthetics of traditional Chinese architecture executed with modern architectural techniques in both its interior and exterior designs, while resonating with the rich architecture and culture of the Forbidden City.


Key Architectural Highlights
The exterior design of the HKPM is inspired by Chinese art objects with fine details, simple contour and elegant form. The building is wide at the top and compact at the base as a way to effectively use the space. The east and west facades have a sloping design that opens up space for the Museum Plaza, where members of the public can relax or gather for art and cultural activities. The sloping facades also offer eco-friendly functions including energy conservation, heat insulation and sound absorption, helping to reduce the impact of noise generated by activities in the vicinity.

One of the key architectural highlights of the HKPM building is the “vertical central axis” concept, inspired by the central axis of the Forbidden City. Leveraging HKPM’s excellent location alongside Hong Kong’s stunning harbourfront, the architects have connected the museum’s floors vertically through three atriums, each facing in a different direction, along the central axis across the ground, second and fourth floors. The atriums connect the different floors on which the nine galleries are located, guiding visitors to move upwards. The three atriums offer sweeping vistas over the West Kowloon Cultural District, the iconic skyline of Hong Kong Island and Lantau Island respectively, allowing visitors to experience the perfect harmony created between the museum building and its surroundings.

The palette of the HKPM building also pays homage to the Forbidden City. Beige gold is the dominant colour, complemented by dark reds and cool greys. The museum’s interior is mostly light grey, while the Forbidden City's signature crimson red is employed in focal points such as the museum’s main entrance and gallery entrances.

A prominent interior feature is the beige-gold ceiling in the form of tidal curves – a contemporary interpretation of the glazed roof tiles on top of the grand palaces inside the Forbidden City. The translucent ceiling resembles a bamboo or gauze curtain, giving the space a sense of poetry and ethereal feel. The second and third floors of the museum are connected by the South Atrium stairway that provides an ideal space for visitors to rest or participate in small-scale performances or lectures.


Main Structure
The Hong Kong Palace Museum mirrors the structure of a “Ding” (a bronze tripod vessel) in its design, adopting the traditional Chinese aesthetic architectural design of “a wide rim with a weighted base”. In order to achieve the desired effect and form a fair-faced concrete facade with a 1 in 3 slope, the project has adopted a four-layer cantilevered upside-down structure, with its maximum cantilever length reaching 14.6 metres, and structural steel component up to the thickness of 100 millimetres, which could weigh 12 tons individually and require four groups of workers to continuously weld for 12 hours. This has made the Museum the first wide-dipping and large-area fair-faced concrete building in Hong Kong.

The location of the museum is surrounded by the sea on three sides, where winds prevail during typhoon seasons. Thus, climatic factors are considered in the museum’s structural design. Glass-fibre reinforced concrete (GRC) is used in both exterior and interior walls to improve its tensile and compressive strength, which are strong enough to withstand a typhoon of wind speed up to 273 kilometres per hour. For its interior design, the Museum has incorporated environmental features by using 3D aluminium panels of 50% light transmittance and designed the atrium ceiling in a flat and wavy shape, so as to maintain both aesthetic value and high level of natural lighting while reducing the use of electric lights.


Advanced Technologies
In order to further improve construction efficiency, this project has adopted Building Information Modelling (BIM), which offers a 3D building simulation software that covers the aspects of building design, construction, operation and the entire life cycle, allowing the engineering team to perform communication, progress monitoring, and joint solutions on the same digital platform. For example, the exterior walls of the Museum consist of 4,022 veneer aluminium panels with different designs, where installation works are susceptible to errors; with the use of BIM, engineers can solve potential problems before production or installation, reduce steps involved in adjustments and corrections, and control the errors to be within 3 millimetres, thereby improving the overall accuracy and efficiency of the work.


Protecting the Priceless Treasures
HKPM houses nine galleries which, upon opening, will present more than 900 priceless treasures loaned from the Palace Museum, along with important objects on loan from other cultural institutions in Hong Kong, and new works by Hong Kong contemporary artists inspired by the rich culture of the Forbidden City. Protecting these precious works is a top priority at the HKPM. With the highest professional standards, the museum follows the best practices in conservation and climate control. For instance, the temperature for the galleries and storages is set at 20±2°C with the relative humidity at 55±5% to provide the optimal environment for artworks. The contractor adjusted more than 8,000 valves and 1,224 air nozzles to achieve the ideal temperature and humidity.

Three different fire-fighting systems (a pre-action fire sprinkler system, the Novec 1230 Fire Suppression System and a long-throw sprinkler system) have been prepared in place by the engineering team to fight the fire and ensure all facilities and cultural relics on the site are not damaged.


Official Opening to The Public
The HKPM officially opened its doors to the public on 3 July. From project initiation, design and construction to completion, the HKPM was opened on schedule, within budget and within five years. As the second world-class museum to open in West Kowloon Cultural District within just eight months, the opening of the HKPM marks another important milestone in the development of the District.