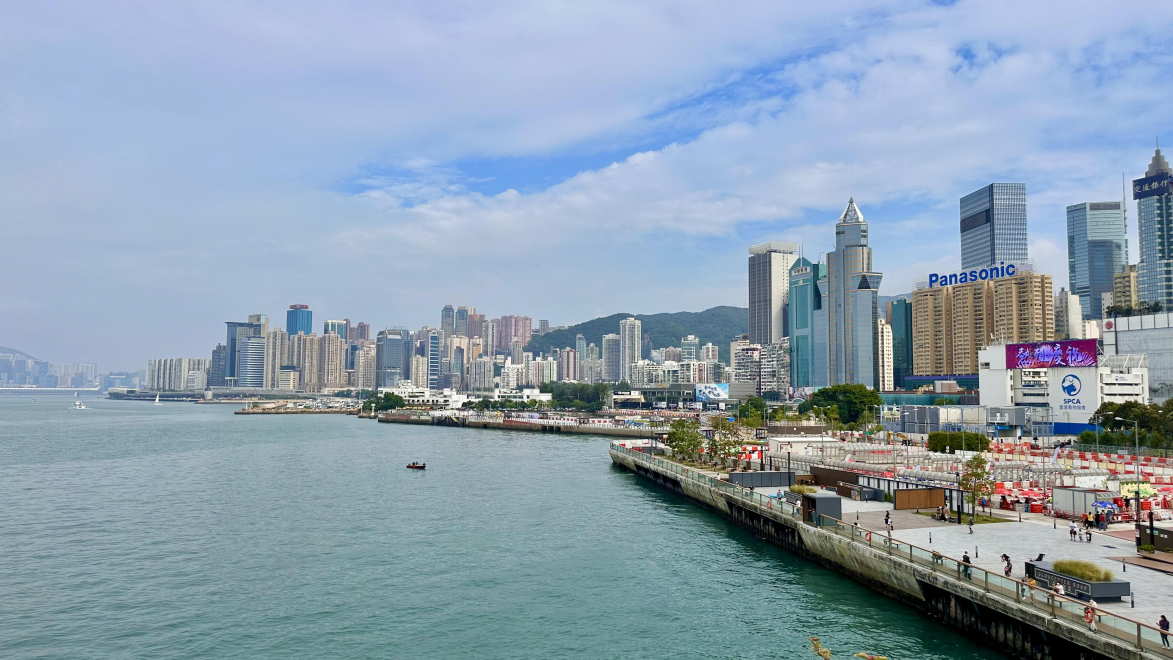 More harbourfront spaces with a brand new look will be made available in the near future, including the Revitalised Typhoon Shelter Precinct and Water Sports and Recreation Precinct (Phase 3) in Wan Chai as well as the first public open space by private developers in Kai Tak. The construction works of the Boardwalk underneath the Island Eastern Corridor connecting Fortress Hill and Quarry Bay has also commenced. Upon the completion of various projects, the total length of promenades is expected to extend to 34 kilometres by 2028.

Open Space at Eastern Street North, Sai Ying Pun (area: 1.32 ha)
The proposed project, with a 440-metre-long harbour frontage, is located between the Sun Yat Sen Memorial Park and the Western Wholesale Food Market. It occupies an area of about 1.32 hectares. The proposed scope of the project comprises provision of a landscaped garde and a promenade forming part of a continuous promenade along the harbourfront. During construction, temporary passageways along the waterfront will be provided at all times to maintain the continuity of the promenade. The Finance Committee (FC) of the Legislative Council (LegCo) has approved the funding of $207.6 million for this project. Construction works are expected to be completed by phases starting from 2024.

Water Sports and Recreation Precinct in Wan Chai North (area: 1.39 hectare); new promenade added through recent projects: 550 m; new promenade to be added: 220 m)
Promenade between Wan Chai North Temporary Public Transport Interchange and Hung Hing Road Flyover, which adopts a removable fence design, was connected in December 2020 and opened, with new sections (including a set of harbour steps, i.e. a fence-free stepped-down water edge design) opened in December 2021. In future, more parts will be released from major infrastructural works and beautified for opening by phases between late 2022 and early 2023.

The Precinct is one of the promenades recommended for development under the Urban Design Study for the Wan Chai North and North Point Harbourfront Areas in 2019. It also adopts a fence-free stepped-down water edge design and provides 90m-long fence-free "harbour steps" to bring the public closer to the water, enabling visitors to enjoy an unobstructed view of the typhoon shelter and Victoria Harbour’s sunset. Besides, the Precinct has beautified the 150m-long promenade, which was formerly known as Ah King’s Slipway, with the preservation efforts of a large banyan tree nearby. More greenery, outdoor tables and chairs, as well as shading facilities will be provided.

Boardwalk underneath the Island Eastern Corridor (new promenade to be added: 1 800 m)
The LegCo FC approved a funding of $1.68 billion in October 2021. Construction works commenced in December 2021 and are expected to be completed by phases from 2024 to end 2025.

Tsuen Wan Waterfront Enhancement (area: 2.05 ha)
Under the incremental approach, the promenade along Hoi On Road (Phase 1 project, which included the introduction of a low kerb design to the sloping sea wall) was completed and opened by phases in September 2019 and April 2021 respectively.

The Development Bureau is currently taking forward the project for Enhancement of the Tsuen Wan Waterfront (Phase 2), which aims to enhance the waterfront facilities and design and improve the connectivity of the waterfront from surrounding areas. The project comprises a 530-metre long promenade for the public to jog and stroll, and a waterfront space project covering an area of about 12,000 square metres. The project will provide a variety of leisure facilities, including fitness and recreational facilities, restaurants, shelters and green zones. The facilities would blend in the landscape design for public to enjoy the beautiful scenery and the Tsuen Wan waterfront space in different ways.

The Architectural Services Department conducted consultant selection process for the detailed design for the project. The selection process completed in the middle of this year. They plan to conduct consultation work, including consultation with the Harbourfront Commission and the district on the detailed design once it is ready. They target to invite tenders for the construction works by the end of 2023 and aim to seek funding approval from the Legislative Council and commence construction works in mid-2024. The project is expected to be completed in phases from the end of 2025, bringing a new experience to the public at the Tsuen Wan waterfront.

Kai Tak Metro Park (area: 12.8 ha; new promenade to be added: 583 m)
Although a majority of the site is still needed as works area until 2024-2025, efforts have been made to minimise the works area and shorten the occupation period so that individual land parcels could be released for beautification and subsequent opening to the public as soon as possible. With such efforts, it is expected that certain parts of the project area designated as Dining Cove and the promenade-cum-open space near the Kai Tak Approach Channel could complete construction and be opened by phases starting 2023. Additional efforts have also been made to reinstate the promenade fronting the To Kwa Wan Typhoon Shelter to be released by the Central Kowloon Route project. It is expected to open by phases starting late 2023.

Cha Kwo Ling Waterfront (area: 4.5 ha; new promenade to be added: 1 043 m)
This promenade project will be taken forward together with the adjacent campus project of the Vocational Training Council. A consultant is being engaged for devising a detailed design for the promenade. On the other hand, the waterfront area to be released from the original Kwun Tong Sewage Pumping Station nearby will be beautified under the incremental approach for its opening in 2023.

Hung Hom Urban Park (area: 2.2 ha)
The site has been opened for public use upon relocation of the public transport interchange thereon in January 2019. Design options are being explored for further enhancing public experience on the site, which will take into account comments received during the Market Sounding Exercise conducted earlier, operational experience upon the opening of the site, as well as the progress of projects being pursued in the vicinity (including the "Open Space Development at Hung Hom Waterfront" project by the Leisure and Cultural Services Department and the beautification of the Hung Hom (South) Ferry Pier).

With the support of the Harbourfront Commission, the government has been actively taking forward various projects with the harbourfront enhancement dedicated funding. At present, the harbourfront along both sides of the Victoria Harbour has a total length of about 73 kilometres. Of this length, some 35 kilometres are unconnected at the moment because of natural coastline, private land and container terminals. Out of the remaining 38 kilometres that have been planned to be developed into harbourfront promenades, about 25 kilometres have already been open for public enjoyment.

The government expects that the harbourfront promenade will be further extended by about one kilometre to 26 kilometres within this year, with the Victoria Harbour promenade further extending to 34 kilometres in 2028. Upon the full completion of the Boardwalk underneath the Island Eastern Corridor in 2025, the harbourfront promenade along the northern shore of Hong Kong Island will be connected from Kennedy Town to Shau Kei Wan.

Apart from developing new harbourfront promenades and open spaces, the dedicated funding has also been used for improving existing harbourfront facilities. Taking the Tsuen Wan Waterfront Enhancement Project as an example, the first phase of the project is mainly improvement works for the existing waterfront. Planters previously separating the water's edge and the walkway have been removed, while a low kerb design has been introduced to the 370-metre section with a sloping sea wall. Such a design has not only brought visitors closer to the water, but also provided ample seating and greater lines of sight for appreciating the stunning scenery of the Rambler Channel and Tsing Yi Island.