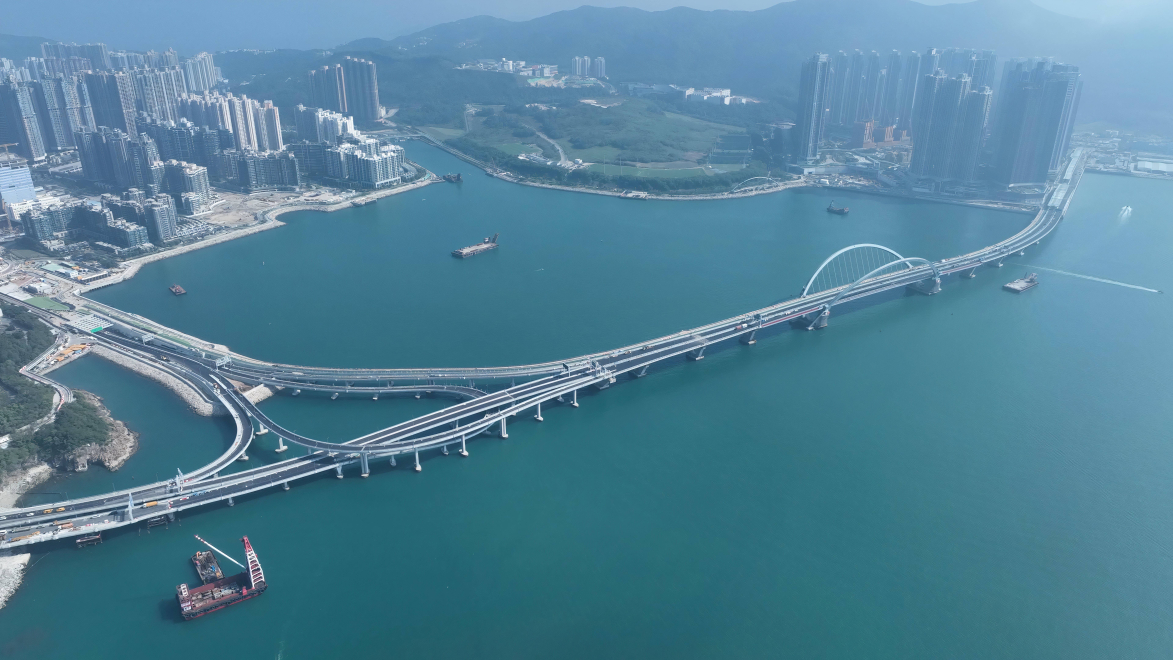 With the further increase in population in Tseung Kwan O (TKO), Cross Bay Link (CBL) is essential to relieve the traffic conditions within the TKO town centre and along Wan Po Road. The CBL is approximately 1.8 kilometres in length, of which about 1 kilometre is a marine viaduct. It links the TKO-LTT and Wan Po Road adjacent to LOHAS Park. The CBL is the first marine viaduct in Hong Kong, comprising carriageways, a cycle track and a footway. In addition to diverting the traffic at Wan Po Road, the marine viaduct connects to the cycle track along the Tseung Kwan O waterfront to form a 5-kilometre coastal cycling track loop. There will also be viewing platforms on the viaduct for the public to appreciate the beautiful scenery of Junk Bay and the Eastern Channel.


Design of the steel bridge

The “Eternity Arch” option was adopted for the appearance of the marine viaduct. The concept of“Eternity Arch” is to create a landmark with special symbolic meaning. Two outwardly leaning arches are visually connected to sculpted piers to create the mathematical symbol of infinity, which is a well known expression of eternity or never-ending.

Formed by 2 high strength steel arches and a bridge deck with 34 stay cables, the steel bridge weighs 10,000 tonnes and is over 40 metres high. It is the longest span and heaviest steel arch bridge in Hong Kong.

Three wind tunnel tests were conducted in Denmark, France and China respectively to determine aerodynamic stability and wind resistance capability of the steel bridge, and acquire design parameters. The test results verified that the steel bridge could meet the design wind speed of 284 kilometres per hour in accordance with the standard stipulated in “Structures Design Manual for Highways and Railways”. In brief, the steel bridge shall be capable to resist the attack of super typhoons.

The double-arch steel bridge is the largest prefabricated component of the CBL, it was prefabricated in Nantong, a nearby city of Shanghai. It took one and a half years to complete.

To ensure safe and stable delivery of the steel bridge to Hong Kong, the project team deployed a semi-submersible barge of 140 metres long and 70 metres wide. Safety and stability are prime considerations when sliding such a mammoth steel bridge from the prefabrication yard to the semi-submersible barge. The project team had to conduct precise calculations and close monitoring of the tides. The aim was to keep the barge deck and the ground of the prefabrication yard at the same level, so that the steel bridge with its support towers could be safely transferred onto the barge. Before departure, the project team reinforced the steel bridge and its support towers, and fastened them to the barge deck to withstand the impact of wind and wave.

As the steel bridge weighs over 10,000 tonnes, the project team adopted the “float-over method” and took into account the tidal conditions for its erection. It is unprecedented in Hong Kong construction industry to adopt this method to erect a bridge. The project team conducted a meticulous analysis of every step to ensure smooth execution of the erection process. The semi-submersible barge moved to a position 30 metres from the bridge piers for final preparation. On the day of the erection, the project team competed with tides and waves every second to flow the barge over the bridge piers during the high tide window. After precise positioning of the steel bridge by 3D Jacks, the barge pumped in 27,000 cubic metres of seawater for ballast, correspondingly lowering the barge by 1 metre for the steel bridge to touch down onto the piers.


Use of high-strength structural steel

CBL extensively adopted Grade S690QL high-strength steel in steel bridge structures. Compared with common structural steel, Grade S690QL high-strength steel processes greater tensile strength, enabling the bridges to use less material under the same loading condition. It also enhances the aesthetic appearance of the bridges, as well as scales down the piers and substructure, thus reducing the carbon footprint and improving the sustainability of the projects.

The marine viaduct of CBL comprises a 600-metre concrete bridge which consists of 18 precast box girders. The longest one is about 75 metres long and of weight about 3,300 tonnes. It is the heaviest and longest precast full span concrete box girder in Hong Kong. The box girder was installed on V-piers at Junk Bay in August 2020. To lift and install the box girders, two crane barges with lifting capacity of 4,000 tonnes and 5,000 tonnes were deployed respectively.

The Tseung Kwan O-Lam Tin Tunnel (TKO-LTT) and the Cross Bay Link, Tseung Kwan O was commissioned on December 11. It provides a new route between Tseung Kwan O and Kwun Tong as well as the Eastern Harbour Crossing, shortening the journey time between the LOHAS Park and Kwun Tong Town Centre by up to about 20 minutes during the morning peak hours.

The TKO-LTT is a new trunk road linking Tseung Kwan O and the urban area, with a total length of about 3.8 kilometres, of which about 2.2 kilometres is in the form of a tunnel. It connects the CBL and Po Shun Road in the east, and the Eastern Harbour Crossing, Cha Kwo Ling Road in Kwun Tong and the Trunk Road T2 under construction in the west. It provides an alternative route to the existing Tseung Kwan O Tunnel to help divert the traffic to and from Tseung Kwan O.